Guest Post: A practical comparison of the financial and ecological benefits of biodiversity at two sites in the UK https://vines.vidacycle.com/wp-content/uploads/2022/07/CovercropSiteA-scaled.jpeg 2560 2560 Sectormentor Sectormentor //vines.vidacycle.com/wp-content/uploads/2020/01/vidacycle_sml-3.png July 19, 2022 July 22, 2022

A tale of two approaches: a guest post
by Joel Jorgensen (Vinescapes)

As a team of advisors and contract vineyard managers at Vinescapes, we are grateful to have a unique birds-eye-view of the UK vineyard sector and we’re certainly noticing some trends, myths and interesting observations.

One such observation was the positive impact that a healthy soil (and I mean truly healthy, not just chemically balanced and well drained) can have on the vines, especially with regards to their health, yields, required inputs and resilience.

To highlight an example, we have two sites with similar terroir, that have historically been managed in very different ways, partly due to their setup and partly just management preferences. Both sites are South facing, well drained on medium textured sandy clay loam soils with good shelter from prevailing winds, sufficient air flow and very little shading.

Site A was established many years ago on Geneva Double Curtain (GDC) trellising, which was popular at the time, while site B is Guyot pruned on VSP (Vine Trellis System). This is where the management differences (all human intervention rather than natural) start.

The ‘T’ shaped trellising of GDC in site A has guaranteed no tractor traffic on the vines’ rootzone for many years, and it has suffered no compaction at all. Therefore, no subsoiling or inter-row cultivation was needed. No cover crops were planted but the naturally diverse flora population has been left to seed regularly over the years. During early season, the naturally taller vines don’t suffer from lack of airflow, despite a taller ground cover. Very few herbicides were used in site A; it was felt that the more vigorous GDC vines could handle some competition, and the taller trunks made it easier to strim or mow under-vine. I’m told spraying was limited to ‘essential only’, where the owners monitored the weather closely and only sprayed when disease was highly likely to appear or already present.

By contrast, site B has been kept incredibly tidy and immaculate since planting. For the first two years, all competition was cultivated away so nothing could compete with the vines. Vine establishment was quick and strong and root penetration went deep. By year 3, a beautiful ‘golf course’ grass was managed between the rows with a very straight weed-free strip under-vine using a combination of herbicides and mechanical control. The spray program here has always been the prudent option of belt and braces with a minimum of 12 fungicide and nutrition sprays per season.

Inspired by Abby and the team at Vidacycle, Vinescapes’ vineyard managers monitor ground conditions, soil structure and soil biology very closely to better understand what the soil can do for the plants and vice versa.

Interestingly, the average scores over time for sites A and B have been very different since planting. 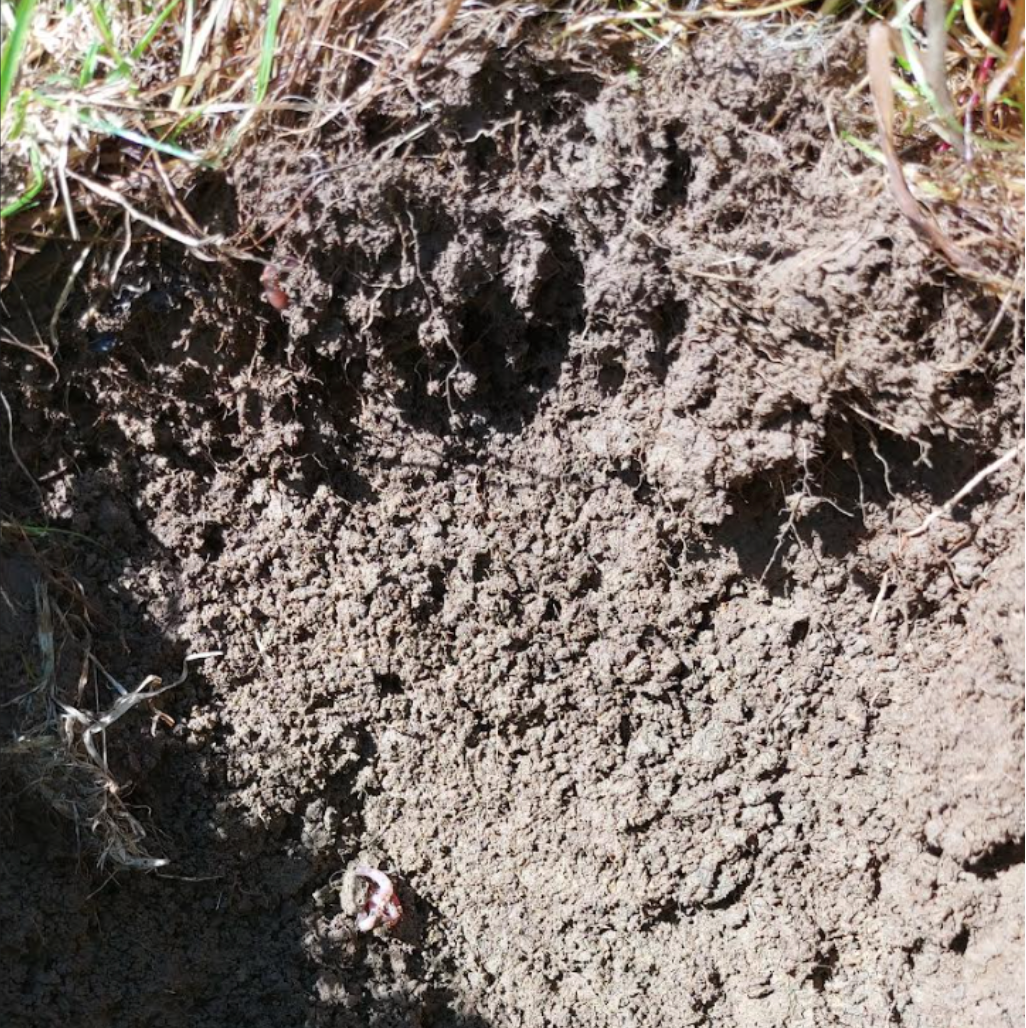 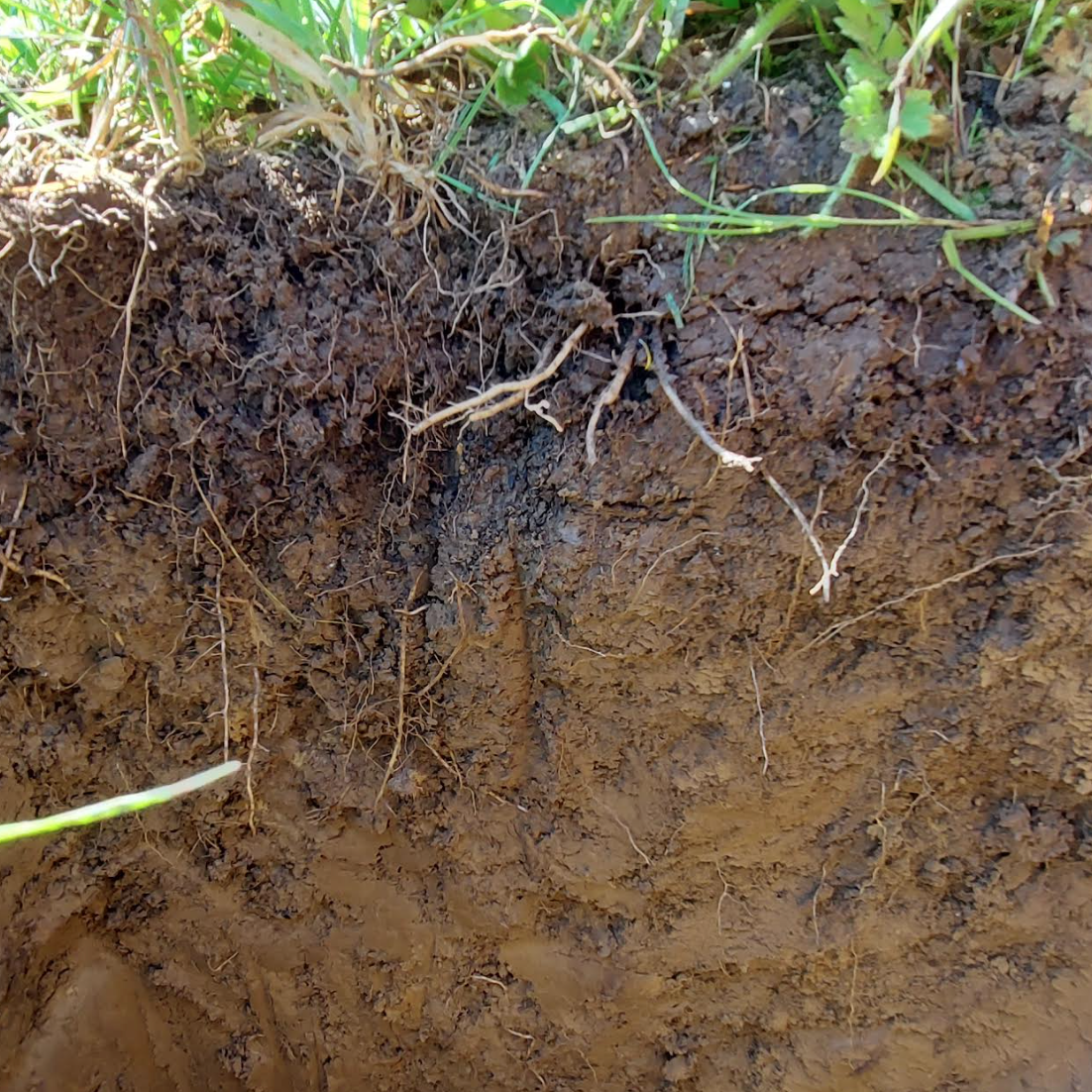 It is clear (confirmed in many other sites) that having less compaction and increased biodiversity within the vineyard, and especially near the vine roots, has a huge impact on the soil structure and food web. Fed by the flora population, the worm, fungal and insect activity within the soil creates a healthy soil structure with increased porosity, resilience, strength, and nutrition. I can’t think of a machine that can replicate this! In practical terms this means less need for subsoiling, artificial drainage, cultivation, or fertilisation.

2021 was a tough season for many growers; with cooler than average temperatures, lower than average GDD, high and frequent rainfall at times and relatively high disease pressure (Downy and Powdery Mildew, Phomopsis and Botrytis). We were not at all surprised to find Downy Mildew and Botrytis in site B despite frequent fungicide use, while site A remained spotless all season with nearly half of the number of sprays.

After harvest the soil analysis showed site A was only slightly lacking Phosphorus and Potassium, both of which are removed from the vineyard in the grapes, while Site B was deficient in Nitrogen, Calcium, Magnesium, Iron, Phosphorus, Potassium, Boron, Molybdenum, Zinc and Sodium. This is clearly linked to the soils’ relative Cation Exchange Capacity (CEC) – where site A is climbing past 23, while site B is scoring only 8.5 and was declining. A soil’s CEC can indicate its ability to hold and release (exchange) nutrients in plant available forms. A soil with very low CEC will leach(lose) most synthetic fertilisers quickly while a soil with higher CEC will hold nutrients and release them to the plants as needed. Whilst the CEC is largely dictated by the soil’s texture class (% Sand, Silt, Clay and Organic Matter) it can be improved by increasing the organic matter content thus enhancing the soil food web and effectively improving the soils natural ability to create, hold, and supply nutrients to the vines. All living soil borne organisms play a role in this process and anything that disrupts the soil, also disrupts these organisms.

Screenshots from Sectormentor’s Earthworm Indicator tool showing the differing earthworm counts at site A & site B against UK benchmarks.

The relative cost differences involved with managing site A vs B are eye watering. The extra sprays, fertiliser inputs, mowing and weed control required in site B drive the management costs to the limits, not to mention the benefits of allowing true terroir to shine through in Site A.

Site B is now on a journey of soil recovery, with improving Brassica mixes sowed with a no-till drill and a lighter tractor purchased to help limit compaction. PAS100 Compost has been spread at 50T/ha and we have stopped using herbicides altogether. We have installed weather stations too, so we can confidently reduce the sprays when safe to do so.

We’re looking forward to seeing how things progress at both sites, and how the soil test results change over time.

Diverse natural flora at site A 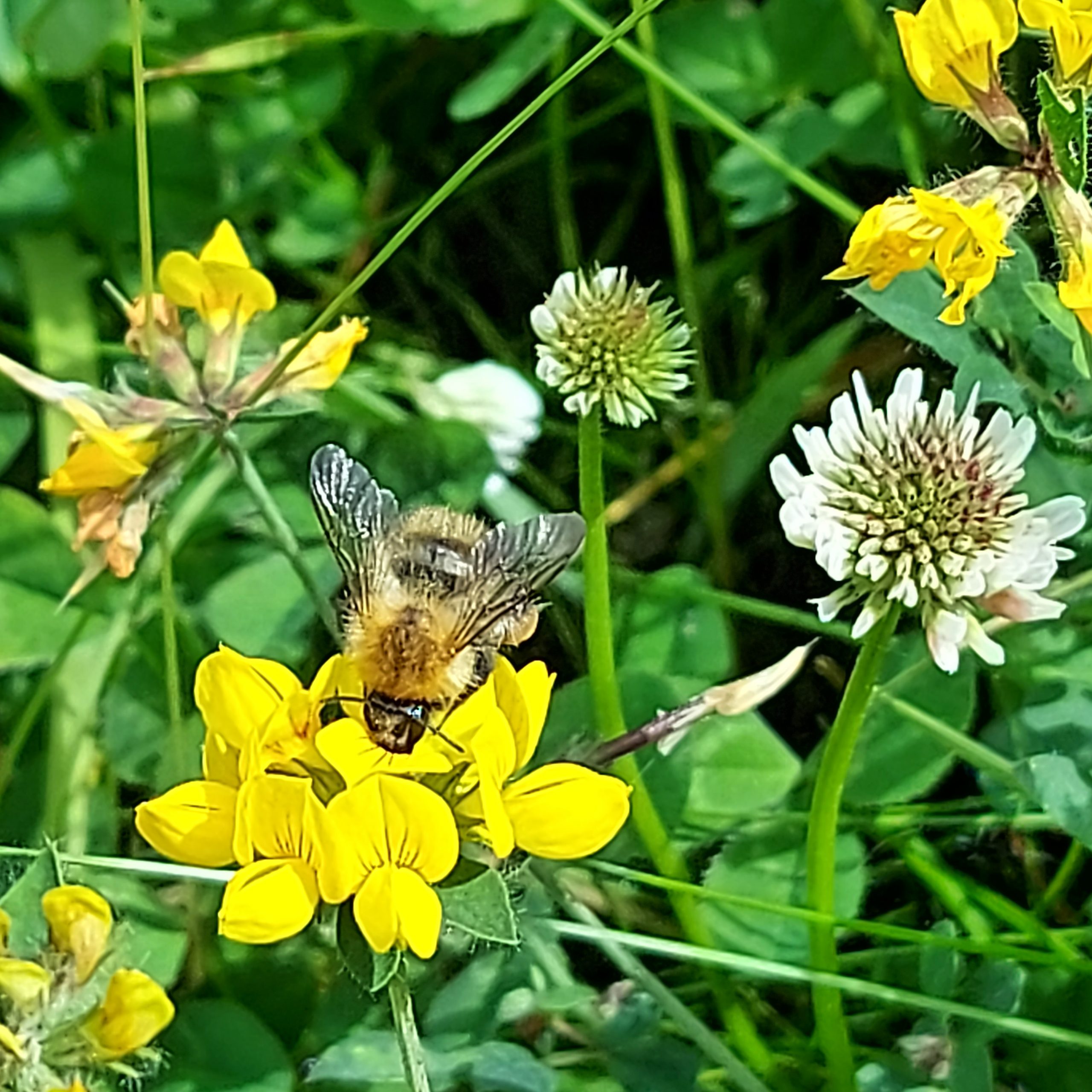 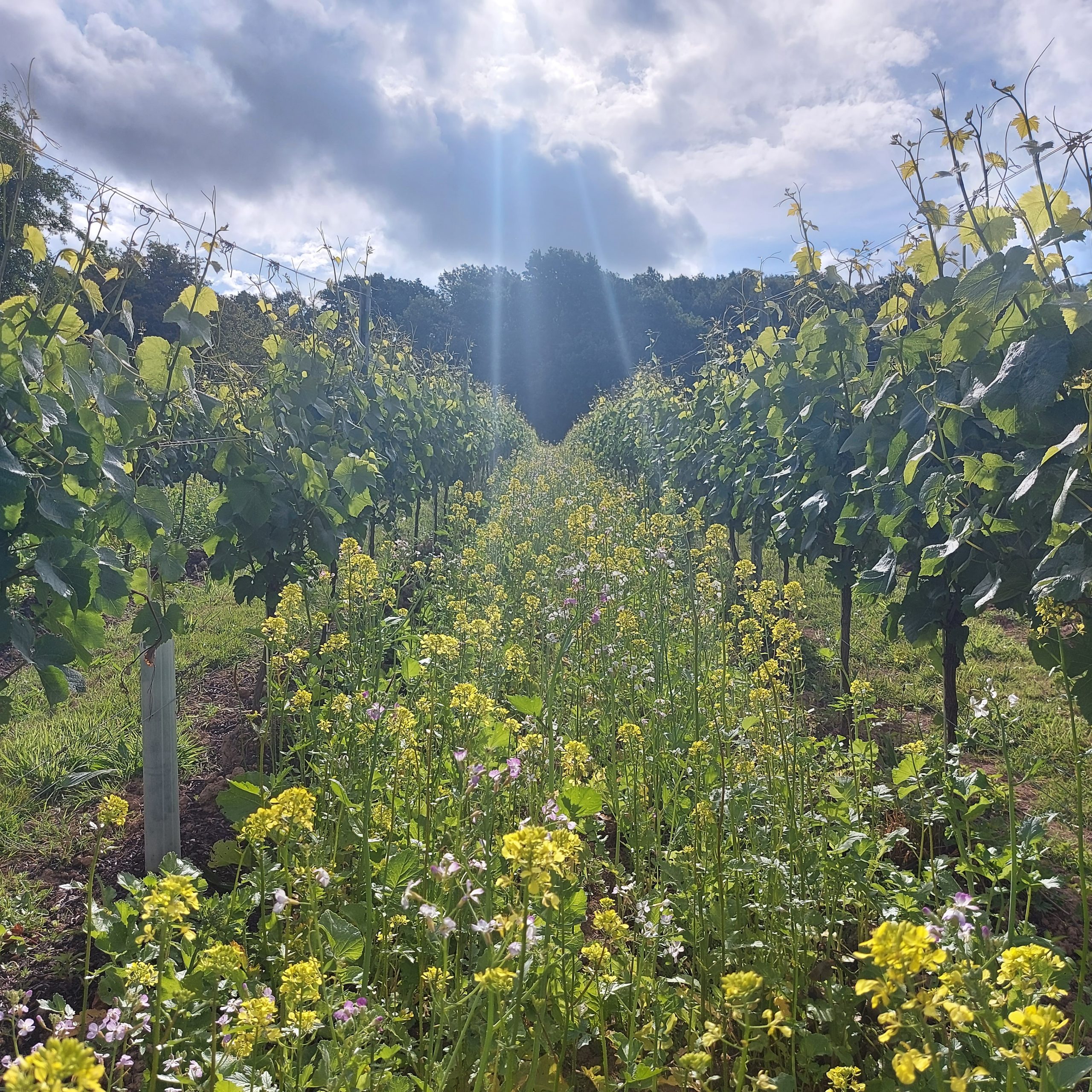 We are proud to support a number of vineyard consultancies that use Sectormentor to support their work in the vineyard. A number of the consultancies have also started to introduce visual soil monitoring and other regenerative indicators aided by Sectormentor, and we will be telling more of these stories in upcoming months.

We first heard Joel at Vinescapes tell this story at an SWGB meeting, and we thought it was a brilliant demonstration of the importance of soil health observation and the core practices that support regenerative viticulture. It’s great to hear how Sectormentor helps Joel keep track of client account data, and bring together a full picture of vine and soil health. We’re looking forward to seeing how things progress at both sites, and to continue to support the great work that Vinescapes do.

Sectormentor pricing
Join our newsletter
You might also like
One of the following
Case Study: learning from vineyard monitoring at Gusbourne
The secret science of why biodiversity is key to regenerative viticulture: learnings from Dr. Christine Jones
Why monitor % short shoots? Regenerative viticulturist Dan Rinke explains