How alive is your soil? Assessing soil health at Bee Tree Vineyard with Vine-Works

We’re working with vineyards on exploring soil health monitoring and the value it can bring to the enterprise. Bee Tree Vineyard in West Sussex is owned and run by Vine-Works, who also provide a suite of management services from planting through to harvest for vineyards across the UK. They use their 1.5 hectare site of vines to trial new management approaches which they might then apply to vineyards they manage for their clients. 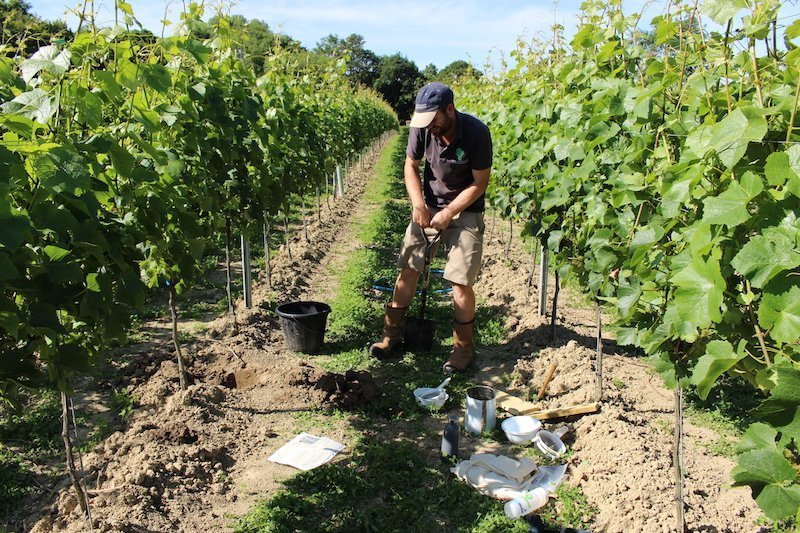 Healthy soil should be brimming with biological life and full of carbon sequestered by a diverse range of plants. Plants exude sugars into the soil through their roots during their vegetative growth, feeding micro-organisms in the soil, which can in turn unlock nutrients for plants to take up when they need them. Micro-organisms also secrete glues and slimes which hold the soil structure together, forming aggregates – the basis of healthy soil. This aggregated structure allows water and air to easily percolate around and through it, so the soil will be able to hold more water deep down in its profile for when plants really need it, as well as remain aerobic. 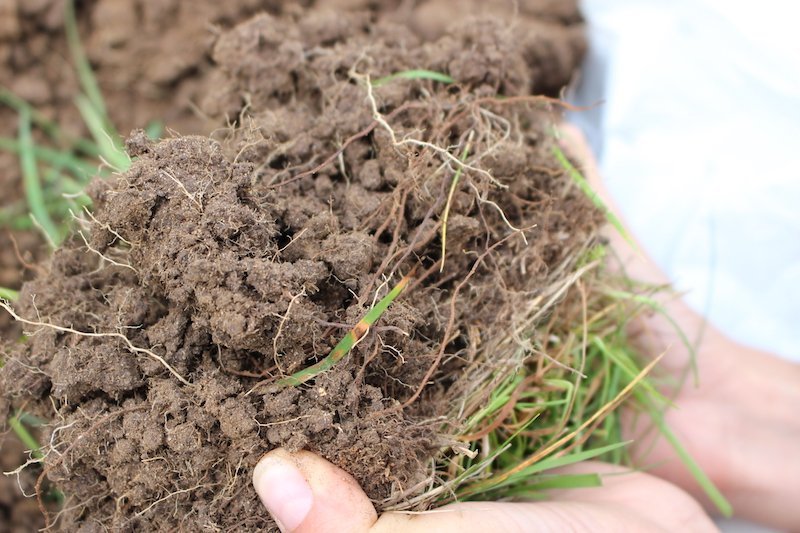 Synthetic and chemical inputs such as herbicides and nitrogen fertiliser, as well as turning the soil, can disrupt plant root-soil interactions and hence disrupt feeding the vital soil biology. Vine-Works have been investigating how to reduce reliance on inputs and manage soil biology positively at Bee Tree Vineyard. The Vine-Works team have replaced undervine herbicide usage with a mechanical undervine weeder which they have found very effective. They’re also trying a new type of chicken manure compost pellet made by ‘Cloud-Agro’ to further feed the life in the soil.

Improving soil biology by increasing plant and root diversity is one of the first steps on the journey to reducing inputs in a vineyard. Vine-Works have been trialling different mixes of cover crops with diverse root systems in the rows in between vines to improve soil biology. When we visited Bee Tree Vineyard we chose sample sites to assess soil health based on the different cover crops to see how these have affected soil structure and biology. Bee Tree are one of our first vineyards to start recording soil health observations using Sectormentor. These first tests form their ‘soil health baseline’ so they can understand where their soil is at now and where they want to go in the future.

By comparing between different rows that were next to each other but had been managed slightly differently we were already able to see some stark differences in how the soil was structured and stored water. One row where the cover crop sewed this Spring had never taken performed significantly worse than the neighbouring row with a cover crop that was well established from the year before. It has already enabled Vine-Works to change some of their management strategy, in that they will now plant their cover in Autumn to give it plenty of chance to establish and reduce the risk of bare soil!

We wanted to talk you through exactly what we did, the different tests and what they mean: 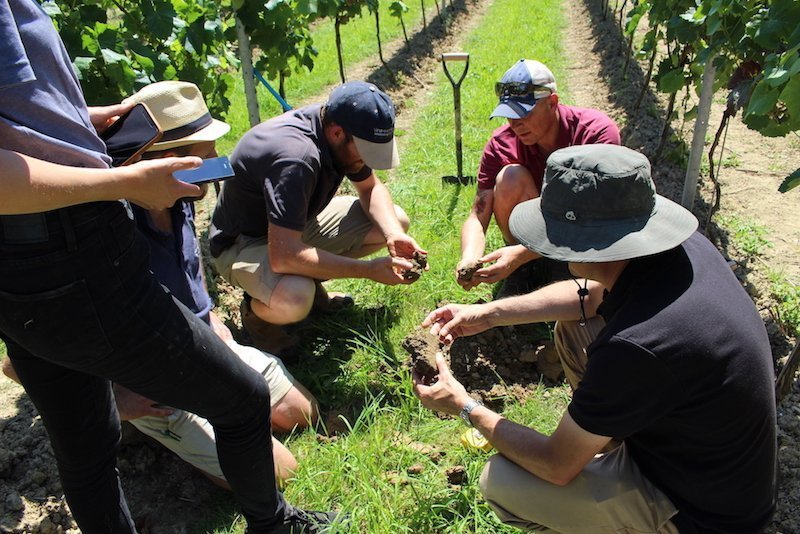 Our first sample site was a block of Cabernet Blanc with a deep rooting cover crop planted in between the rows, including radish, chicory and cocksfoot grass in the mix. These plant species are good at getting roots down into the soil, breaking it up, and bringing nutrients up from below. We saved the exact location of the sample site using GPS coordinates in the Sectormentor app. This means the team can go back to the same place in 6 months or a year and test again to see how things have changed. 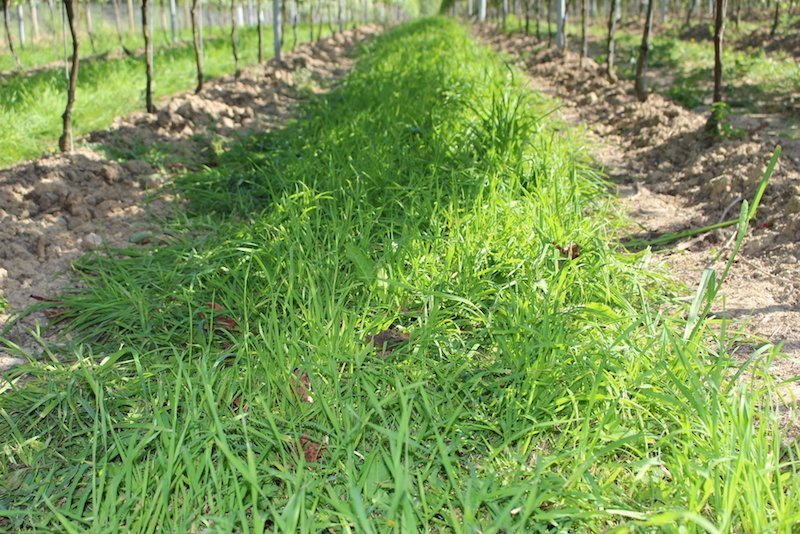 First we dug out a spade’s width soil pit and visually assessed the soil structure (VESS test) for both under the vines and in the row. Under the vines the soil structure was quite blocky, but it did break down relatively easily in one hand. It was slightly better in the row under the cover crop, where the first inch of soil in the rooting area was nicely aggregated, but the clay got harder and blockier as we moved down the profile. 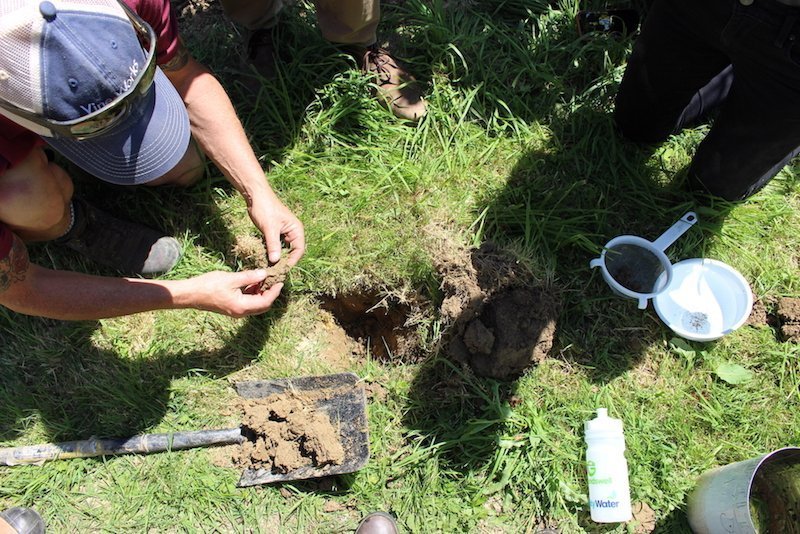 Next we did a Slake test, submerging 1p sized bits of the soil in a sieve in water and observing how quickly it broke down. The soil under the cover crops did well in the slake test, only losing around 20% of its structure. If the soil is alive with micro-organisms the structure will be held together with glues and slimes they secrete, and so it will not break down so much in water. If the soil is held together by compaction, it will break down easily. This test gives you an idea for biological life in the soil and how much soil could be running off your vineyard in heavy rain. 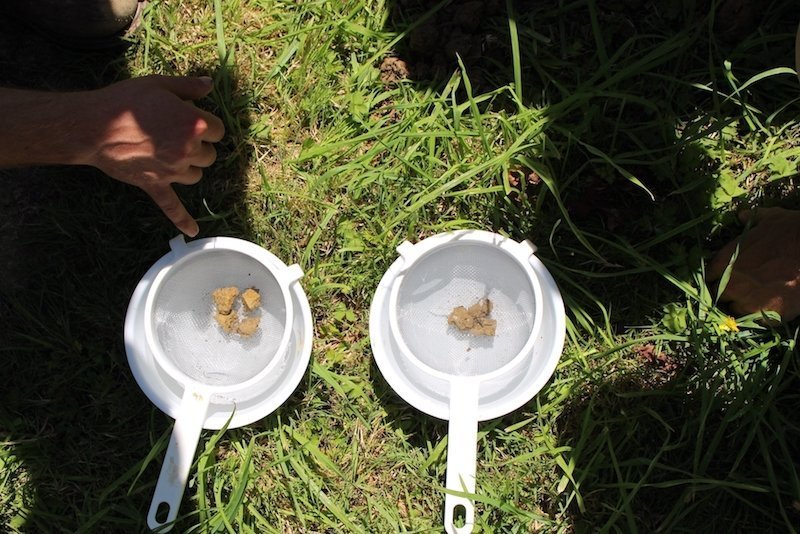 Finally we did Infiltration Rate test by knocking a 150mm tube into the ground and pouring in an inch of water. This gives an idea for how easily water can percolate into the ground and be stored there, instead of running off and into water courses. The infiltration rate was very slow under the vines, suggesting water can easily run off from this area. However it infiltrated faster into the cover crop, which is good news as it  suggests rain water will be better stored in the soil for drier periods when the plants need it. The Vine-Works team used Sectormentor to record all these results so they can start to compare them with other sample sites across the vineyard. 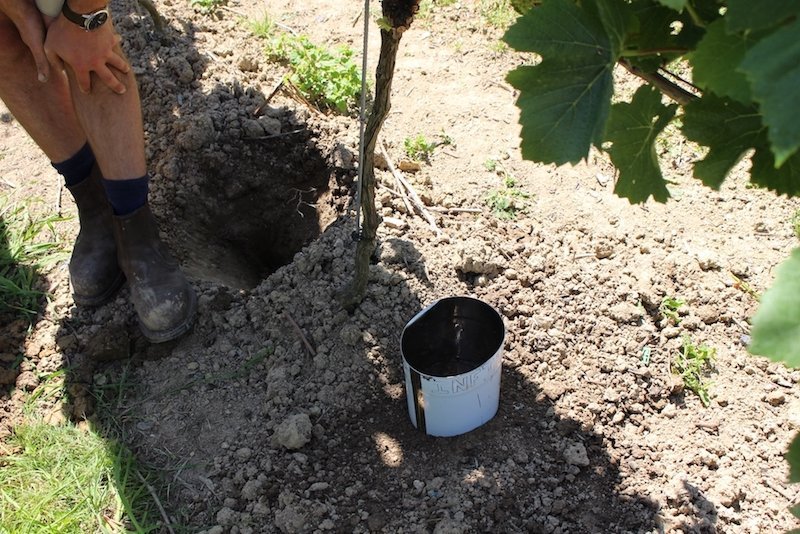 Next we headed next to a block of Pinot Noir with a different cover crop in between the vines, a mix including clover and trefoil. Clover is a legume and has the capacity to fix nitrogen in the soil on nodules on its roots. Here we found the cover crop had not established as well as the deeper rooting cover we previously tested. 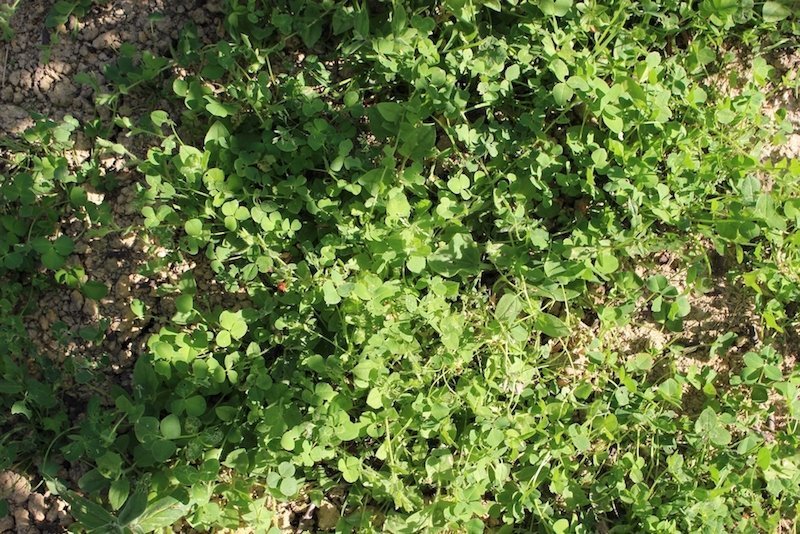 There was much more bare soil in the row, which means there are no living roots feeding the soil in these places and the soil is more at risk of running off with heavy rain. The Vine-Works team recorded the % of bare soil, broadleaves, grasses and undesirables in the Sectormentor app, so they can assess how well they are improving plant diversity. We dug out a soil block and instantly noticed how much drier and blockier it was than the soil at the first sample site. It was harder to break down with one hand, breaking up into angular blocks. So, it didn’t score as well on the VESS test as the first site! 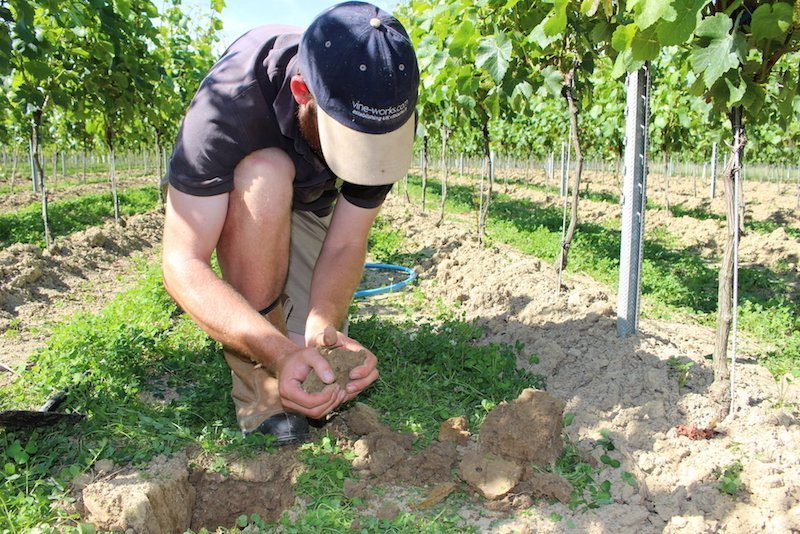 Now onto the slake test, placing 1p pieces of soil into water; due to the high clay content in the soil it held together relatively well, but still broke down more than the first sample site, losing more than 30% of its structure, showing that there is less biological life in this soil. 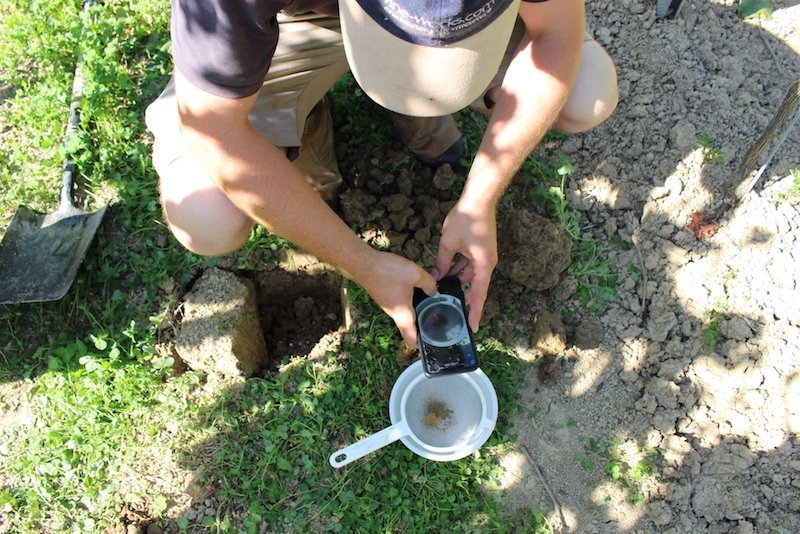 We really struggled to get the infiltration rate tube into the ground, showing compaction issues, which were corroborated by the very slow infiltration rate both in the row and under the vines. The Vine-Works team recorded all the soil test results and the GPS location of the pinot noir sample in Sectormentor; in the future they will be able to see the sample site on the map and get back to it easily to test again and see if things have improved. 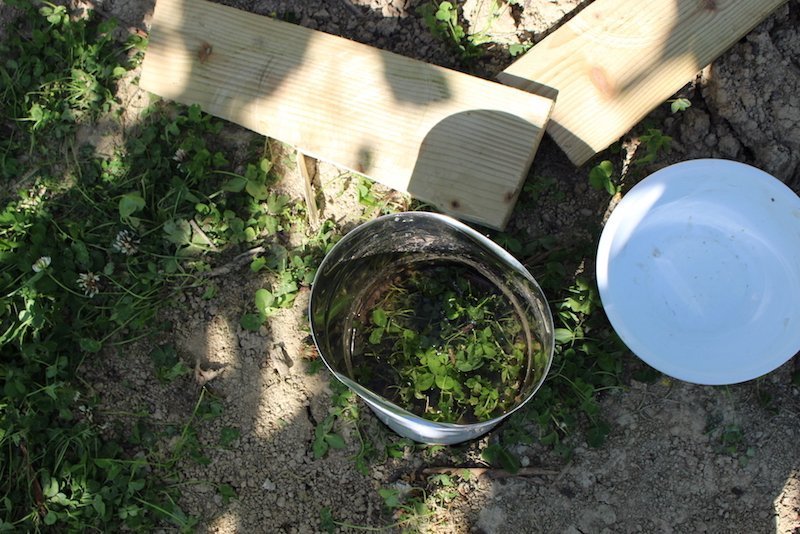 At the second sample site the lack of establishment of the cover crop had clearly affected the soil health in that part of the vineyard, whereas at the first sample site the soil biology had started to get going. It was exciting to see so clearly how the different cover crops had affected soil health, allowing the Vine-Works team to understand what’s happening below ground and make decisions on how to move forward with improving soil health. The team went onto sample another site in the Pinot Noir block which had the deep rooting cover crop and did an ‘under the hedge’ test to get an idea for how good the soil could be. For an ‘under the hedge’ test you find a completely undisturbed spot of soil, by a hedge or in a woodland, which has not had any intervention. This will give you an idea for what the soil biology and structure could be like!

So, what’s next on the soil health journey for Vine-Works & Bee Tree? Soil monitoring regularly will help them understand the impact of different vineyard management techniques on their soil health. After varying success at establishing cover crops this season they plan to sow their cover crops this year just after harvest (Oct/Nov) rather than in Spring. From the VESS, infiltration rate and slake tests they could easily see just how negative the impact of bare soil from a poorly established cover crop can be, so by sewing in Autumn it will guarantee plenty of water to get the cover crop established. It was also clear that undervine cultivation was greatly slowing the infiltration time under the vines, so they are much more likely to get serious run off and leaching of nutrients from this soil. They have plans to try alpine plants under the vines next season, which will provide perennial cover and living roots in the soil all year round. These are hardy plants which do not need reseeding, so it’s an exciting trial!

In the autumn the team will be heading out to do earthworm counts, as it was too dry to do them when we visited this time. Earthworms are one of the best indicators of biological life in the soil, as if they are plentiful and present and active, many of the microorganisms will be too.

Find out how Sectormentor helps you monitor soil health in your vineyard & learn how your soil is changing. Contact us if you have questions!

Get started with Sectormentor
Sign up for our newsletter
You might also like
One of the following
Case Study: learning from vineyard monitoring at Gusbourne
Guest Post: A practical comparison of the financial and ecological benefits of biodiversity at two sites in the UK
The secret science of why biodiversity is key to regenerative viticulture: learnings from Dr. Christine Jones

Know your vines #7: How to optimise your yield prediction and the power of the Yield Predictor Tool – PART 2