Luke is running fascinating trials at Everflyht Vineyard, which we had the pleasure of seeing when we visited in August 2019. He sees the positive management of ecology as an investment in the long-term health of the vineyard. Improving soil carbon and biodiversity kick-starts natural cycles, building healthy soil which supports healthy vines, and healthy vines require fewer inputs. We love to see a vineyard working with nature in this way!

Reducing herbicides with under vine mulching
Luke is exploring an alternative weed control to herbicides; he hand weeded several rows in May and laid out straw under the vines as a mulch layer. The straw suppresses and smothers out weeds, as they are shielded from light and air. It’s working well, although there are a few drawbacks – the straw is expensive and it’s time consuming doing the initial weeding and laying it out. The straw they tried this year is specially formulated by Leeds University; it is infused with iron, magnesium and a natural slug repellent. One herbicide application is still required at the end or the beginning of the season, but this is a good reduction from the 2-3 applications in rows without straw mulch (which also have a healthy crop of thistles underneath!). Luke feels this method has great potential, particularly if the cost of straw can be reduced and if the weed burden gets lighter and lighter each year in the mulched rows as is predicted. 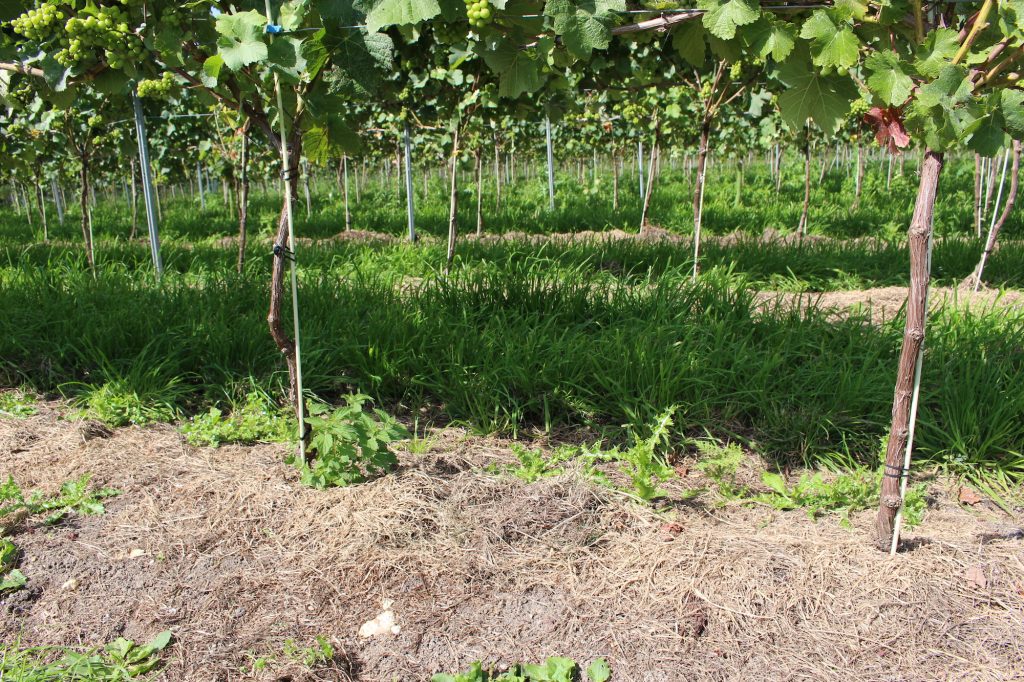 Mulching straw also benefits soil health under the vines, as it covers the soil which prevents soil moisture from evaporating (particularly useful if you’re in a drier, hotter climate). It provides a source of organic matter as it gradually decomposes, which stimulates and feeds the microbial community in the soil which in turn release nutrients for the vines to take up. Applying any herbicides or chemicals disrupts microbial activity, and so making an effort to reduce these inputs helps the natural cycles to start working with you.

Encouraging biodiversity and soil health with cover crops
In between the rows Luke seed drilled a deep rooting cover crop of red clover, buckwheat, phacelia, cocksfoot grass and ryegrass. The phacelia sprung up tall, dramatically increasing the number of pollinators to the point where two bee hives have naturally formed on the outskirts of the vineyard in old rabbit warrens! The original seed mix only had 20% grasses but they turned out to be very vigorous growers, out competing nearly all the other plants in the mix. Luke mows the grass strips in between the vines every 2-3 weeks and the cuttings are discharged out from the sides of the mower and straight under the vines, creating a green mulch on the soil (and adding to the straw mulch where this is being trialled). Read this paper about floor management and how green mulch is can improve fruit set!

Although cocksfoot grass is great as the roots go down around 40cm Luke plans to reseed the cover crop mix in between the vines to regain the plant diversity he had before, adding red clover, phacelia and buckwheat back in. This is important for attracting beneficial insects and helps build soil health too. A diverse range of roots will stimulate the soil biology which generally improves soil structure. Deeper rooting plants in the cover crop mix are great for breaking up compacted areas of soil. A diverse and deep root system opens up new channels for water and air to percolate down through the soil profile and be stored for uptake by the vines in dryer periods and helps turn the subsoil from anaerobic to aerobic. This all helps to improve drainage, which has been a big challenge at the site. Luke’s diverse plantings don’t stop at in between the vines, he is using a similar cover crop mix to prepare a 4.5 hectare site to be planted up with vines in 2021. This invests in improving soil health, as legumes fix nitrogen and there is lots of root to soil interaction, sequestering carbon, getting all the great microbial and fungal life going before the new vines go in. 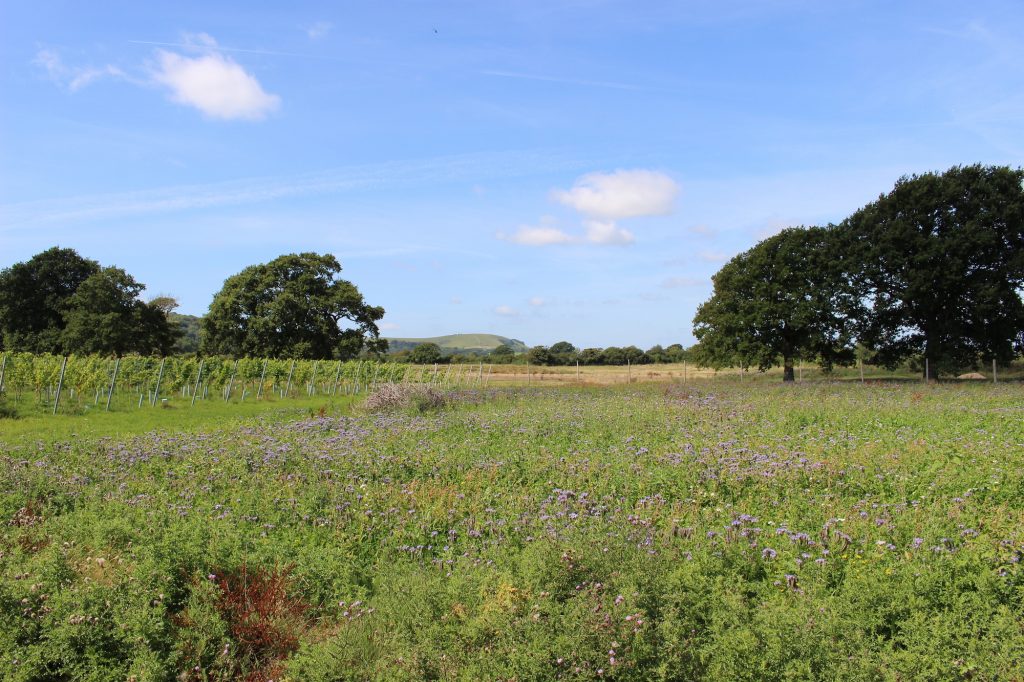 Reducing pesticides with buffer strips
Phacelia is abundant in buffer strips along the sides of the vineyard, which attracts a healthy population of pollinators and beneficial insects. At the moment Luke monitors the insects that pose a threat to his crop, but he’d like to monitor beneficial ones in the future too. Then he could see how the populations buffer each other, and if they are in balance. 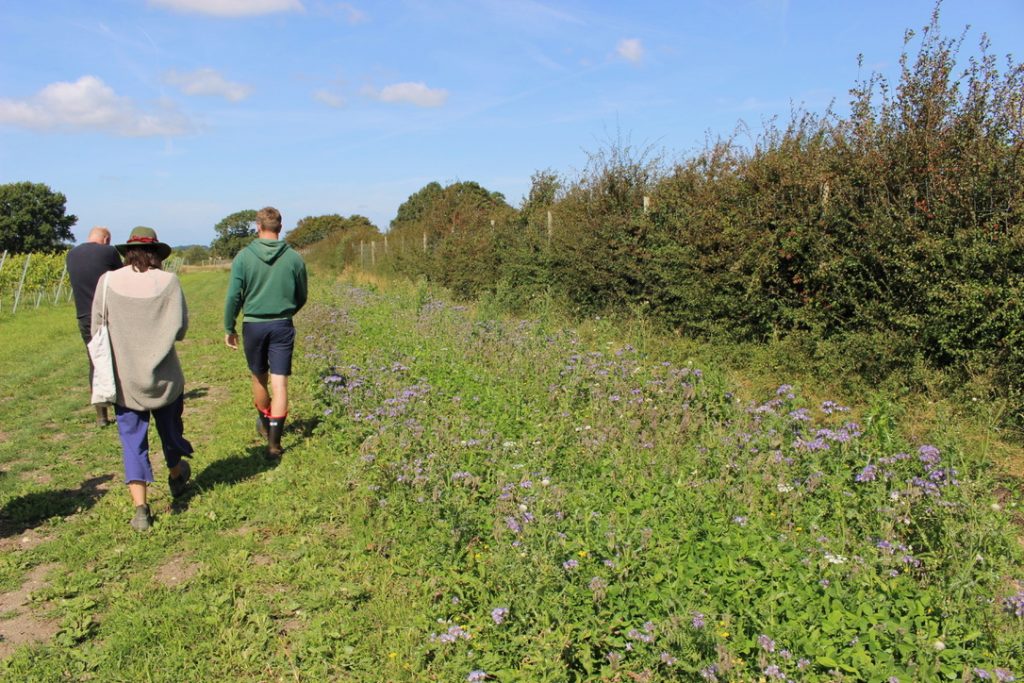 Luke sets traps to catch one of the insects he would rather not have – the brown apple moth. If there are more than 14 moths in the trap in a month period he usually sprays the vines to reduce them and 11 has been the highest count so far. It’s great he hasn’t had to spray this season, which could be due to them being predated by bees, wasps and hoverflies attracted by the buffer strips. If you’re reading this and you manage a vineyard, have you also seen reduced brown apple moth pressure this year?

Using techniques to encourage plant and insect diversity, improve carbon sequestration and build soil health are all ways you can take a more regenerative approach to managing a vineyard. There are some fairly quick wins with implementing practises like cover crops and straw mulching, but for the most part they are part of a much longer term strategy. A strategy that builds up natural resilience in the vineyard to pest pressure, disease risks, and changing climate, while reducing the need for intervention with chemicals that disrupt nature from doing its thing!

Interesting in learning more about applying regenerative approaches in your vineyard? Read this case study about Johan Vineyards and/or get in touch with us.

Get started with Sectormentor
Sign up for our newsletter
You might also like
One of the following
Case Study: learning from vineyard monitoring at Gusbourne
Guest Post: A practical comparison of the financial and ecological benefits of biodiversity at two sites in the UK
The secret science of why biodiversity is key to regenerative viticulture: learnings from Dr. Christine Jones