US-based cover crop supplier Green Cover Seed recently hosted a fascinating 4-part webinar series with Dr. Christine Jones. We definitely encourage you to watch them, but to get you started we’ve pulled together some of the key insights from these videos, with a specific focus on how Christine’s teachings can be applied to regenerative viticulture.

The main takeaway from across these four webinars is that diversity in living plants is the most important focus on any farm aiming to build healthy soil and healthy plants. This is a topic that has been discussed in the regenerative farming community for a while, but Christine shares how soil science is beginning to explain the mechanisms occurring between diverse living roots and the soil microbiome (the makeup of fungi and bacteria) and it all starts to make a lot of sense.

Christine makes clear that diversity aboveground is directly linked to diversity belowground, and diversity belowground is linked to the health and carbon storage capability of the soil as well as pest and disease resistance of any plants communing with that soil. There’s no doubt that these outcomes are of real significance for any viticulturist!

So how does this all work, and what are the key messages for viticulturists learning to regenerate their piece of earth? We’ve pulled out three key areas that Christine shared about:

Christine cites some of the papers presented at the Wageningen Soil Conference we wrote about here, emphasising that the early model of the soil food web is beginning to be replaced by a new, more dynamic model. Previous models of the soil carbon pathway (or soil food web) were fairly linear, with carbon entering the soil through breakdown of above ground matter and detritus by larger organisms and fungi, propelled by a chain of soil organisms eating another. It is now understood that this ‘decomposer’ food web pathway is only responsible for small amounts of carbon entering soils. We are beginning to replace this conventional soil food web diagram with a new model, with fungi at the forefront.

It is now understood that the vast majority of carbon entering soils does so through the ‘fungal energy channel’, which Christine also refers to as the liquid carbon pathway. Essentially, living plants use sunlight and atmospheric CO2 to photosynthesise, creating sugars (carbon) which are channelled down into the roots and released in the form of root exudates to the surrounding soil. These exudates are consumed by a multitude of fungal and bacterial communities, which transport carbon compounds around the soil.

A healthy microbiome (dominated by saprotrophic and symbiotic fungi) will stabilise the majority of this carbon within the soil. It is this process of moving carbon from the air into stable soil compounds which is referred to as the fungal energy channel, or liquid carbon pathway (1). This fungal network is also responsible for supplying energy to bacterial communities producing plant-available phosphorus and fixing nitrogen into the soil. 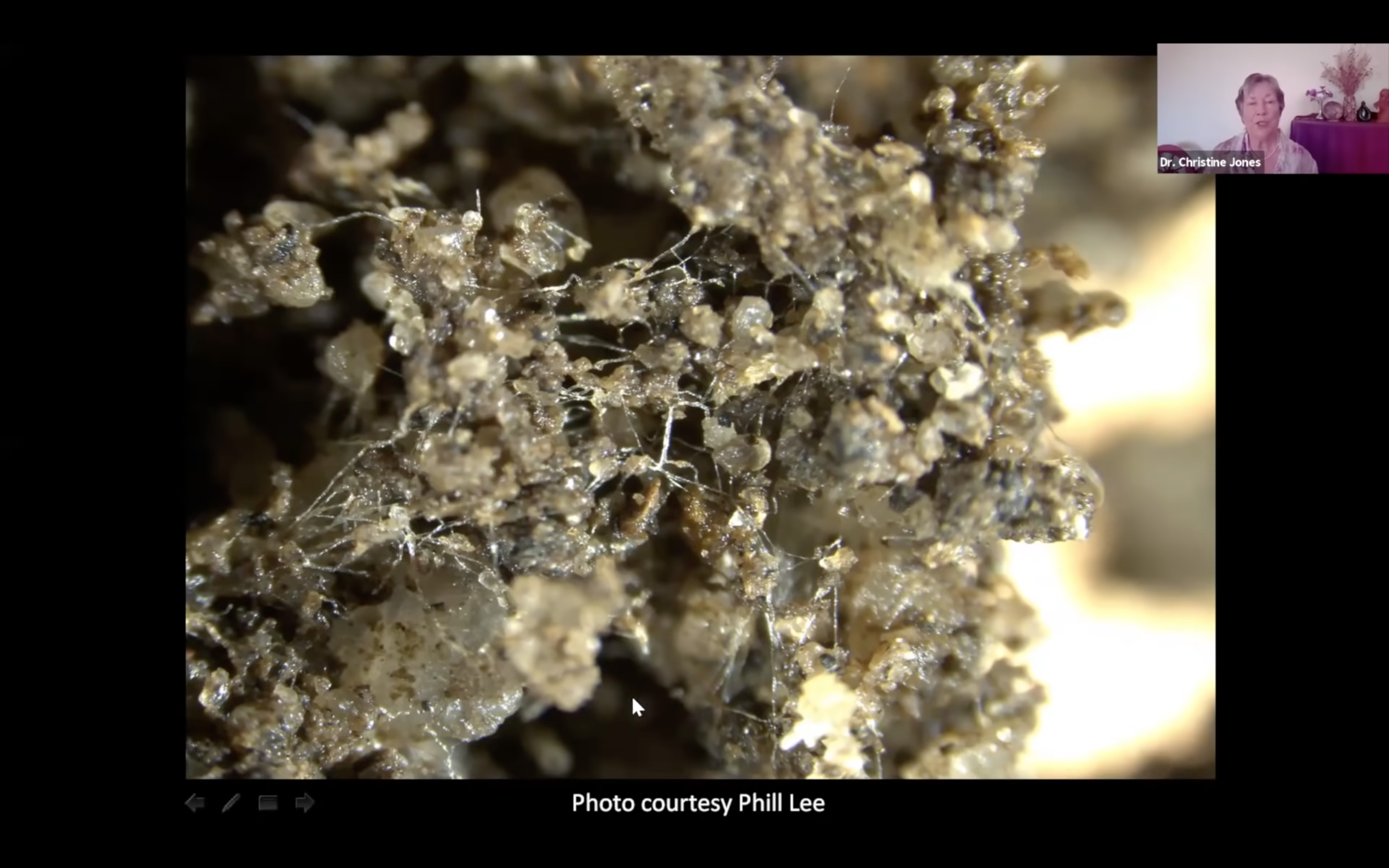 The health of your soil is a key determinant of how effective this fungal energy channel is, and a simple way to observe the pathway in action is by looking for rhizosheaths in your cover crop mix – they are evidence of fungal hyphae feeding off sugars exuded from plant roots and fixing nitrogen. You can keep a record of your score for rhizosheaths at set sample locations in the Sectormentor app!

The diversity of plants growing in the soil is core to improving your fungal pathway. This is true for a number of different reasons: 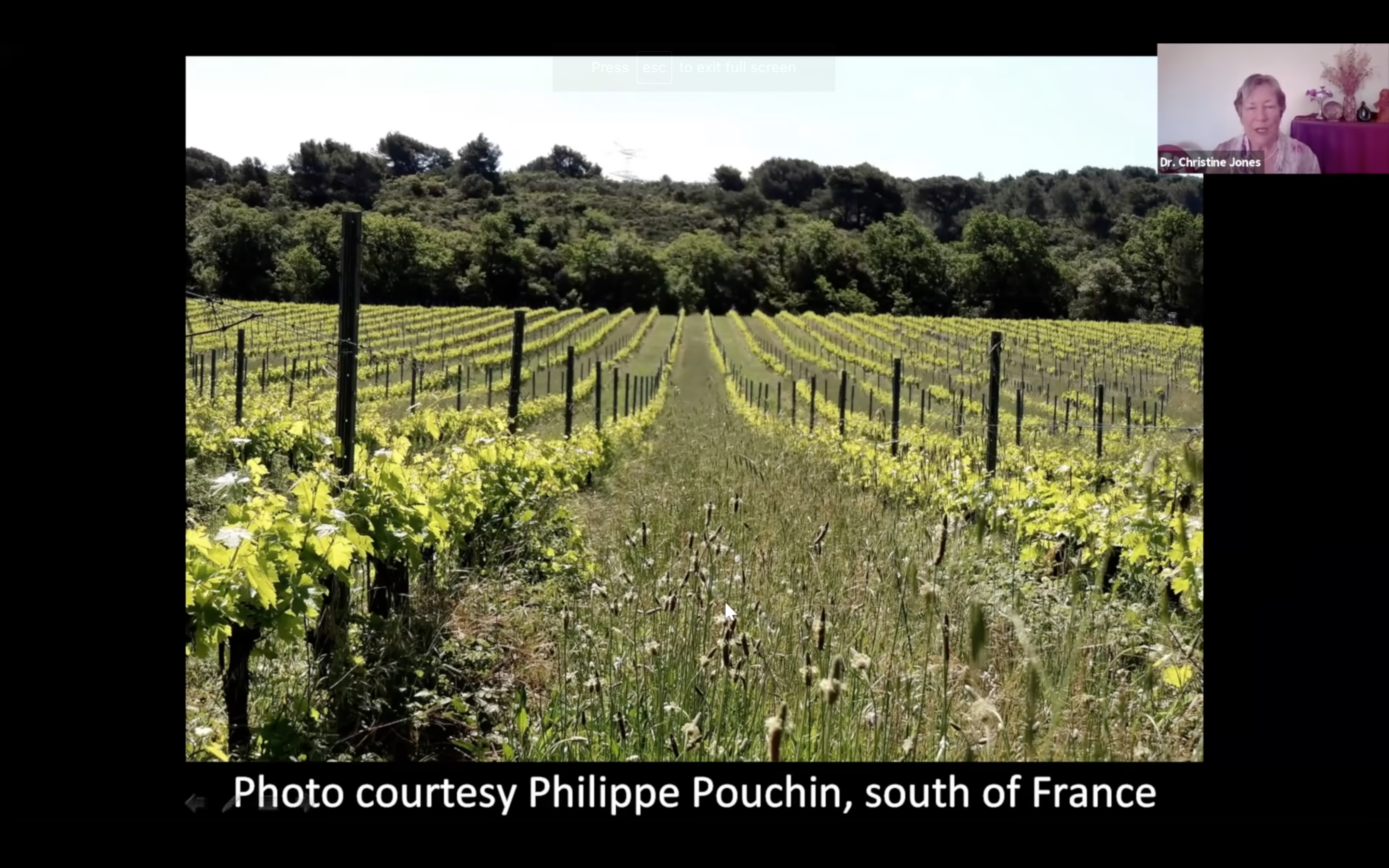 2. The importance of signalling chemicals – the language of the microbiome

You can think of soil as a complex network of microbial life. This microbial community is fed by the aboveground world through plant roots and their exudates, and these microbes send out signalling chemicals to interact with each other and with roots in the soil (3). Christine refers to this complex network of connections as the ‘soil sociobiome’.

One way to activate certain elements of the soil sociobiome is by adding signalling chemicals to the soil ecosystem. Christine defines a biostimulant as a substance that activates many of the dormant microbes in the soil. We learn that the majority of soil microbes exist in a dormant state until they are activated by biochemical signalling.

Christine’s advice is that it is best to apply biostimulants to seeds before sowing (which we’ve heard re-iterated by Nicole Masters and John Kempf), as the most important feature of biostimulants is the signalling chemicals they contain. Ideally, a germinating seed should be forming a strong relationship with soil microbes from the beginning of its life, and establish a healthy ‘endosphere’ – the microbiome within the plant itself. Using biostimulants as inoculants for new vineyard and cover crop plantings will maximise these kinds of associations. We also learn that a biostimulant produced through a fermentation method will contain many more signalling chemicals than one from aerobic production methods (e.g. vermicompost, korean natural farming products, bokashi). These chemicals have been observed to persist in the soil across multiple generations of plants, so the effects on the soil microbiome can last (4).

N.B. Vermicompost is considered a fermented product due to processes in the worm’s gut causing fermentation.

Increased plant diversity also increases crop resistance to pests and diseases. Christine refers to expanses of monoculture as a “recipe for disaster” in terms of pest pressure.

This buffer against pest pressure is not always about eliminating the pest or disease, but about supporting the crop to be more resilient, and better equipped to fight infection and remain productive. There are more microbial cells in plants than there are plant cells, and this ‘endosphere’ of bacteria, archaea & fungi moving around among the cells of the plants are capable of supporting the plant to resist pest and disease damage.

Plants ‘call for help’ when they are under attack from pests or diseases, and free living microbes in the soil can be ingested to support a defence against this attack (2). This call for help will go unanswered if the soil microbiome lacks sufficient health to respond. The solution is to ensure diverse cover crop species are planted in the inter-row to support proper functioning of the soil microbiome, so soil microbes can be internalised by distressed crops through roots when needed.

Key actions to take from these webinars

Sectormentor pricing
Join our Newsletter
You might also like
One of the following
Case Study: learning from vineyard monitoring at Gusbourne
Guest Post: A practical comparison of the financial and ecological benefits of biodiversity at two sites in the UK
Why monitor % short shoots? Regenerative viticulturist Dan Rinke explains