Gusbourne is an acclaimed English wine estate, with two vineyard sites in Sussex and Kent.  Gusbourne wines won a record-breaking number of medals at this year’s WineGB awards, with six golds and six silvers. We have been following the Gusbourne team over the last four years, since they first started using Sectormentor, and in that time we have seen them experiment with more and more regenerative approaches to vineyard management. Adam, assistant vineyard manager, told us about a few key changes that are beginning to have a significant impact.

One of the central changes made at Gusbourne is reducing their mowing – they now don’t mow between the vines until July, and after then only three times per year. This simple change has multiple benefits. Firstly, it greatly reduces the number of passes they are doing in the vineyard; reducing fuel use, limiting weight on the soil and freeing up time to do other work in the vineyard. It’s also resulted in a huge increase in butterflies and birds, thriving in the longer grass, alongside a decline in pest pressure – clearly visible from their insect counts on Sectormentor. 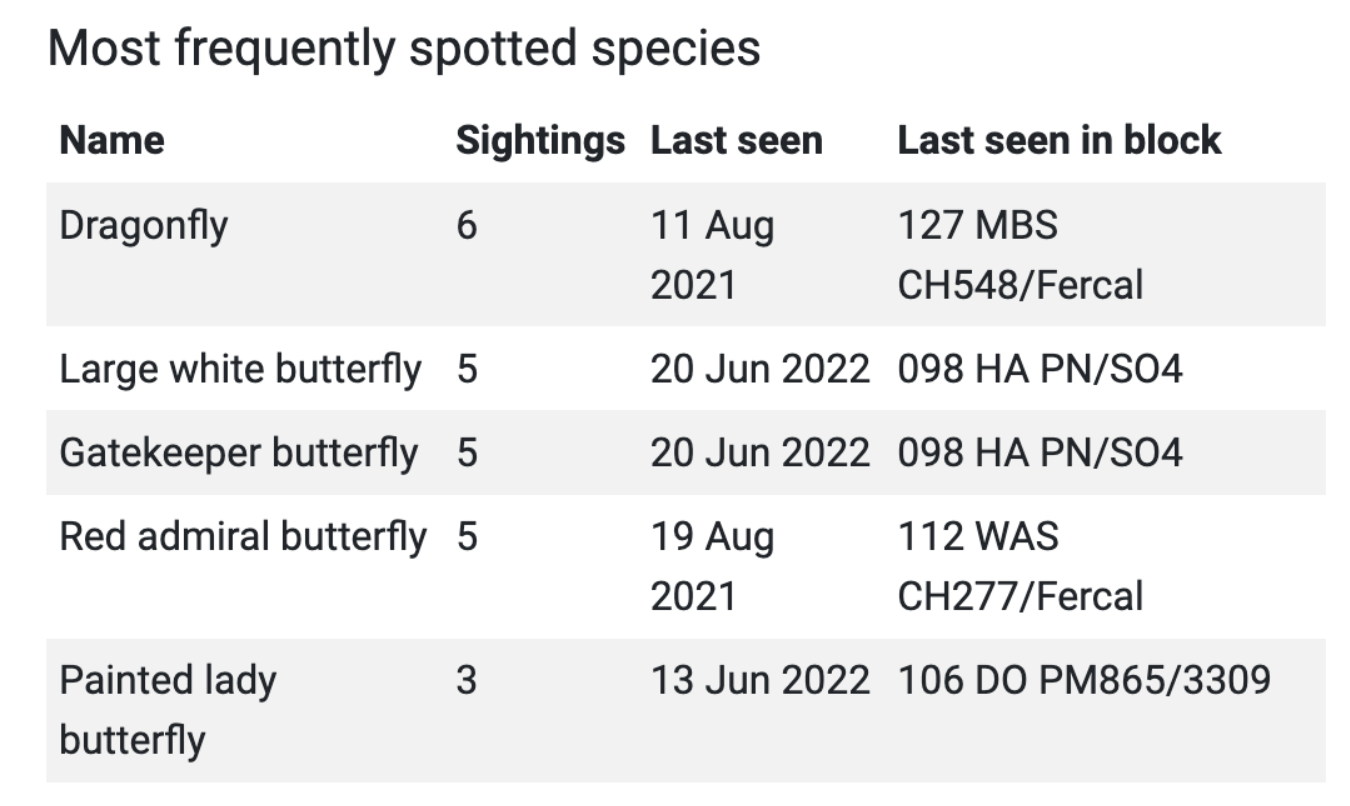 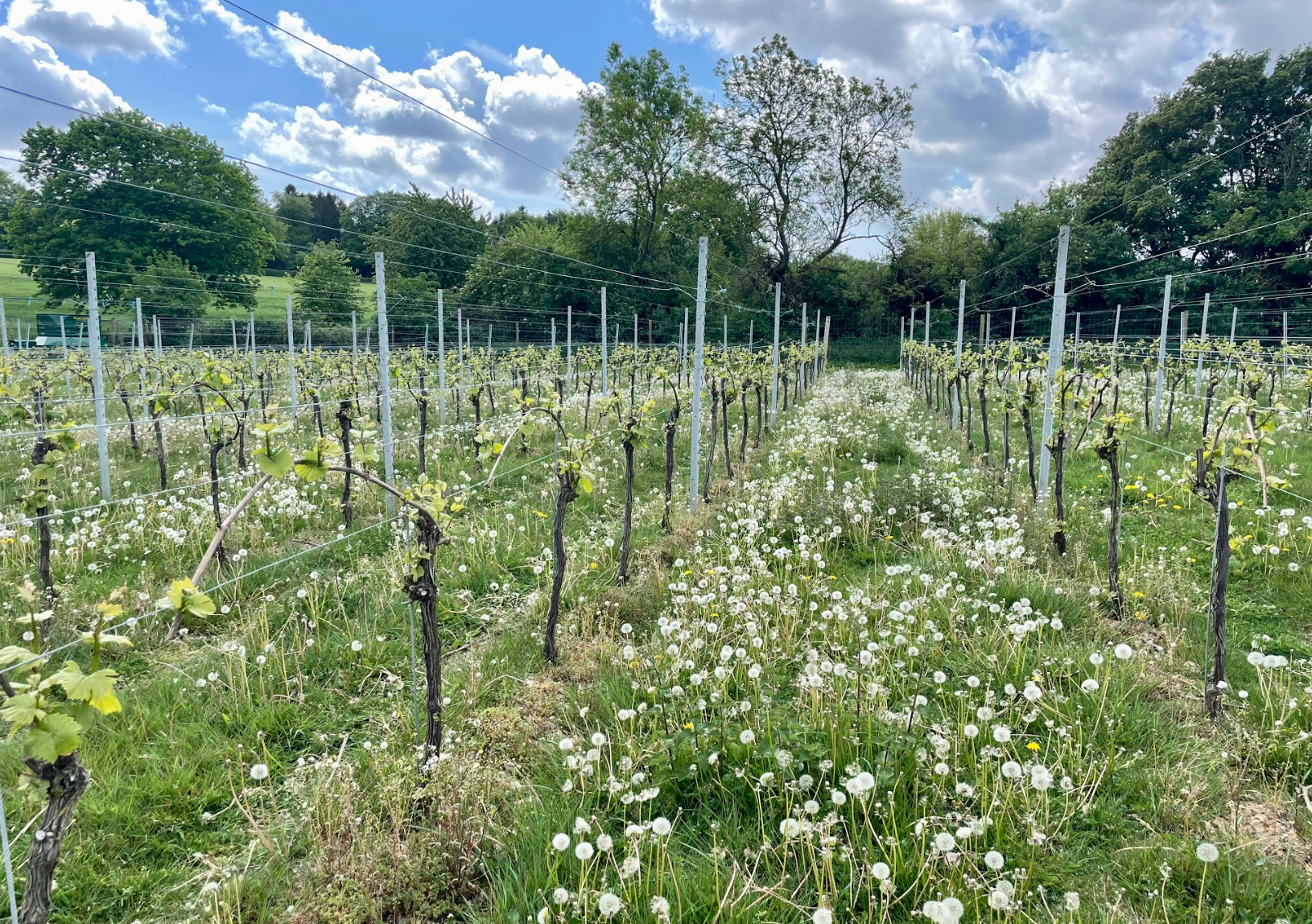 Adam told us his team have been recording wildlife sightings on the Sectormentor phone app to track what’s changing: “I put a couple of team members onto Sectormentor for identification of insects and the biodiversity side of things, and that gives our full time team lots of pleasure. Being more interactive with all aspects of the vineyard, not just observing and recording the vines.”

As every site is different, the importance of observation is central to a more regenerative approach, and it’s great to see how this has started to benefit Adam and the team: “tapping into the power of observations is a key part of the app – it allows you to record observations very neatly and review them quickly, in a way that isn’t complicated. I get a lot of pleasure from using it.” 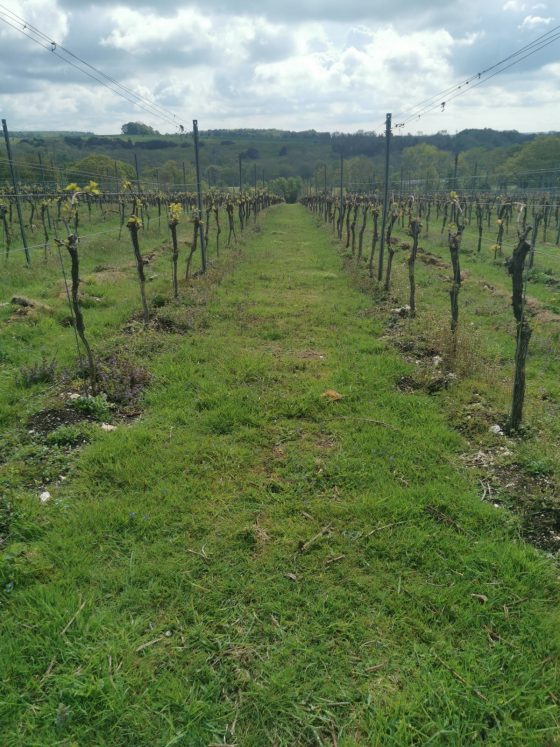 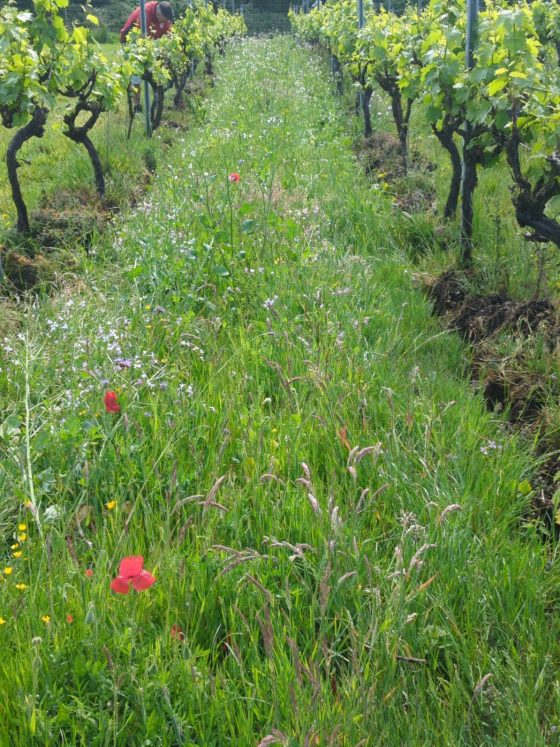 Immediate Yield Prediction from the field

Another focus for the Gusbourne team has been improving their yield predictions. A more accurate prediction for each block or varietal helps to bring a certain level of efficiency to the business, streamlining production to make communication with the winery or sales team much easier. Previously, bunch and flower counts were recorded on paper at Gusbourne, and then uploaded at a later date. The team were also doing ‘random’ sampling of around 0.5% of vines, which was all that was possible in the time they had.

Using Sectormentor has freed up some time for the Gusbourne team – they have created set sample sites marked by GPS locations, making monitoring much more efficient, and enabling the team to double the number of vines they sample up to 1% in the time they have. This greatly improves the accuracy of their yield predictions, and recording everything in Sectormentor also means their forecasts are available immediately across both sites – allowing Adam and Jon (vineyard manager at the Kent site) to stay on the same page.

“There is an obvious financial saving from mine and Jon’s time for yield estimation, because now it can be done in the field, and because the app makes finding sample bays so seamless, we have switched to using set sample bays. The time saving for data collection is astronomical, that is what hooked Jon on it – he is a Yorkshireman so he has quite a tight wallet. What got him into using it is he can go to sample bay, record that data and when he’s back at the office everything’s there, the yield forecast is already done.”

“For the yield prediction alone it has probably saved me 10-12 hours a year at the computer, that is time that I was not out in the field looking and actually managing the vines. It means I can be out in the field with the guys, I can still work with everyone and do it on the phone… I can stay with team and things are streamlined” 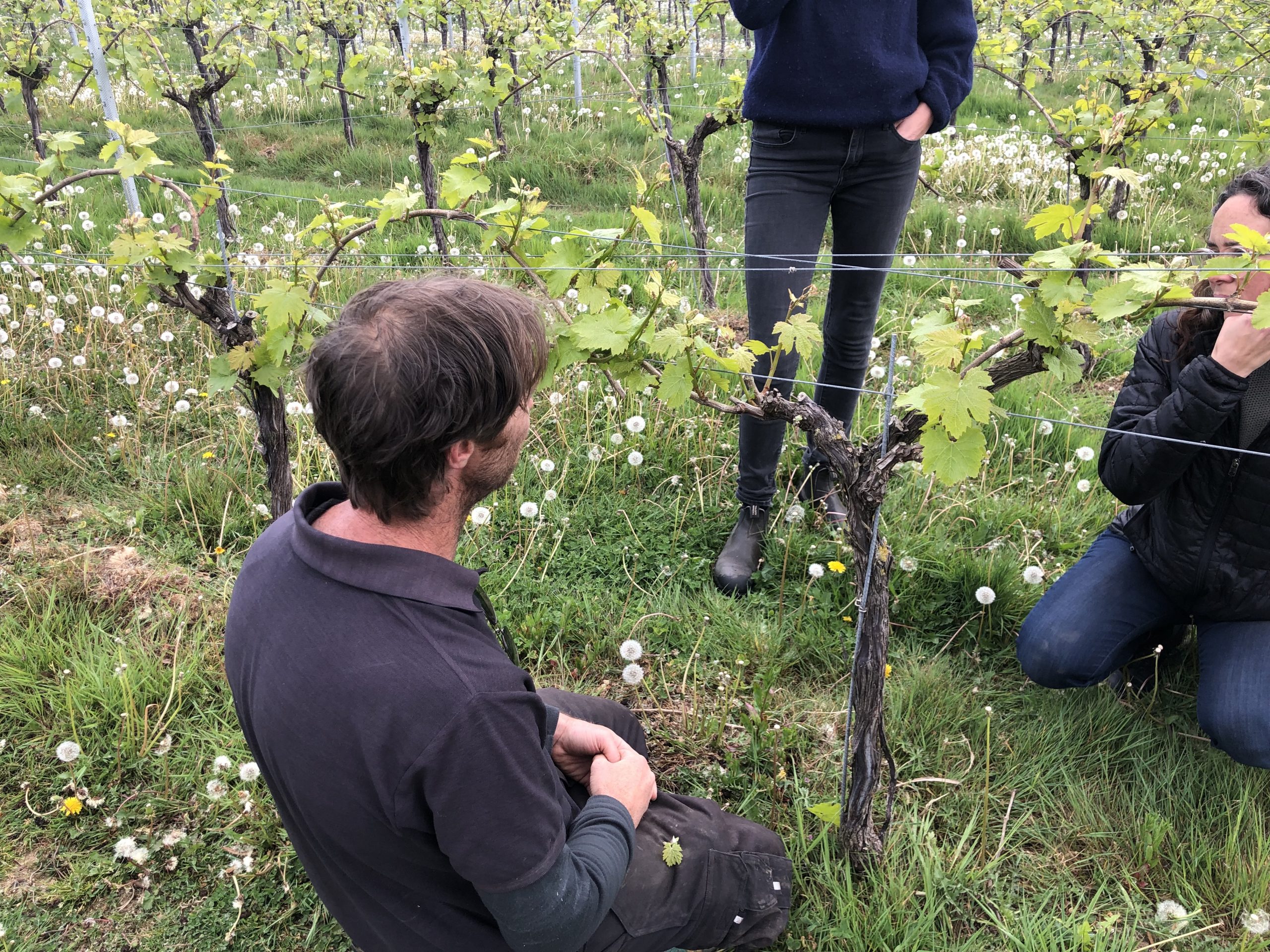 The immediate conversion of raw data into graphs and visualisations is also helpful in many other ways, as it allows the Gusbourne team to come together and make informed decisions more quickly across multiple sites. Adam told us, “Sectormentor gives a quick snapshot of what’s happening in the vineyard, which is what we need in a conversation and making decisions in a hurry. It’s a really speedy and nice way to do it.”

Not only is this year’s data immediately visualised, but viewing it together with past years’ data makes analysis much more powerful, as well as keeping other members of the winemaking team in the loop even if they aren’t in the vineyard.

Jon told us: “When you see a visual representation of graphs over years, how bud burst has fluctuated and how flowering has fluctuated, it’s really valuable to see these patterns so easily.” Adam added: “Charlie, our winemaker, started to take note of it last year. The winery could just click on the phenology report and think ‘this year looks similar to 2017’ so we can start to get an idea of what to expect.” 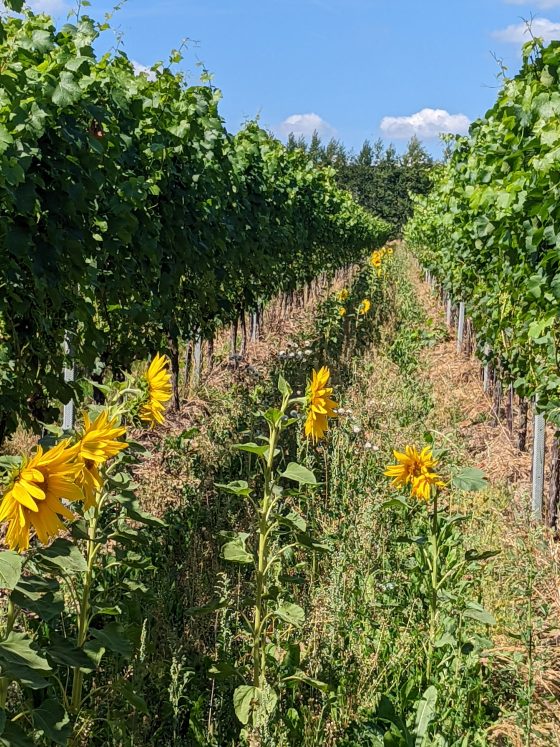 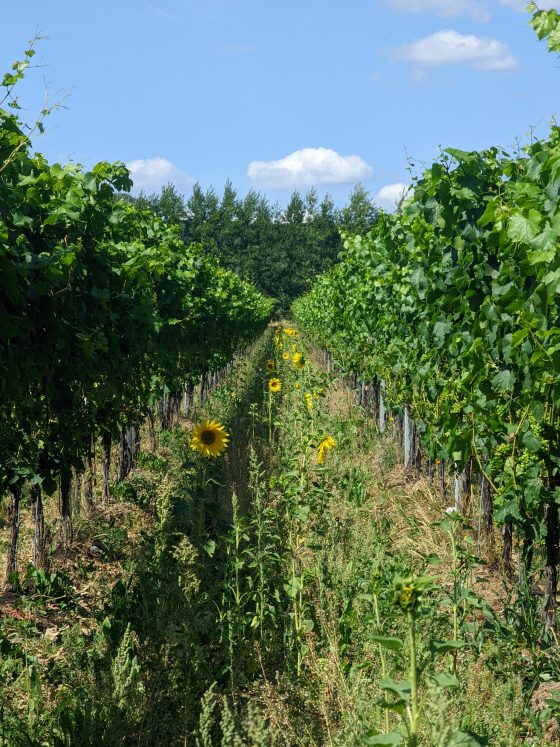 Recent photos from Adam of Gusbourne’s cover crop in flower

Adam began digging holes and looking at the soil structure inspired by soil tests on Sectormentor a few years ago. He had some pretty big realisations about the soil, particularly compaction issues, which are detailed in an earlier case study we did on Gusbourne. These early Sectormentor soil tests have been recently clarified into the 10 ‘Regen Indicators’, which support the learning of a diversity of insights about your soil.

Adam told us about the emerging benefits in his latest experiments to work through the compaction with cover cropping and ripping: “We’re really noticing benefits with some of our operations. We have gone through the first pan this time, reseeded with another 30-40 species, trying to find our own mixes that work for us, as there aren’t many pre-mixed seeds for vineyards. The main cover mix recommended for vineyards is phacelia, black oats and vetch. So I have been trying lots of other mixes.” 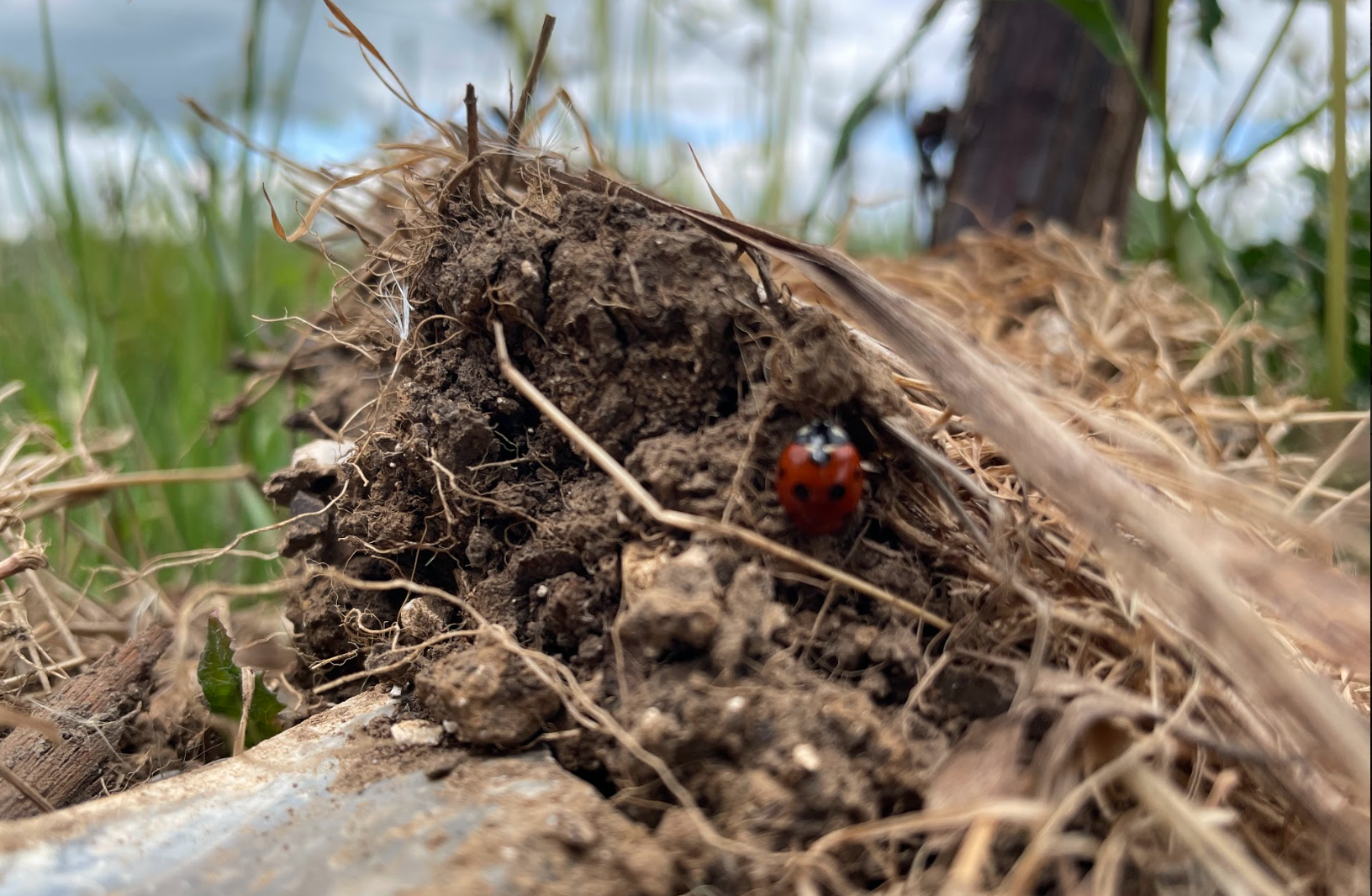 Sectormentor also allows Adam to use the regenerative learning loop and has prompted him to look at and investigate soils in ways he wouldn’t have previously:  “It’s definitely aiding in the regenerative transition. Things that I wouldn’t think of have popped up on the app in the last year or two, and it makes me try them out. To support that it’s a brilliant method of recording what you are doing, then seeing how it’s affecting things and then changing your practices based on the results.”


We’re excited to continue to support Gusbourne, and to see how their regenerative management develops over time.

Join our newsletter
Buy Sectormentor
You might also like
One of the following
Guest Post: A practical comparison of the financial and ecological benefits of biodiversity at two sites in the UK
The secret science of why biodiversity is key to regenerative viticulture: learnings from Dr. Christine Jones
Why monitor % short shoots? Regenerative viticulturist Dan Rinke explains